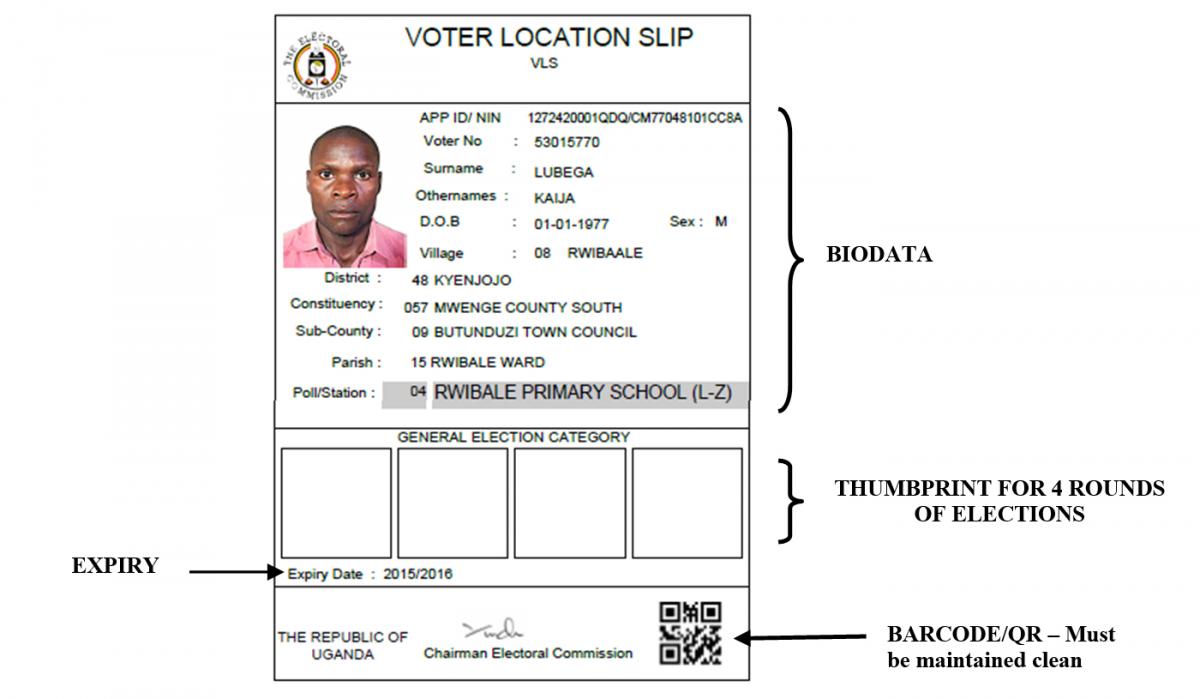 In accordance with Section 33 (1) and (2) of the Electoral Commission Act (Cap 140), the Commission shall, by notice in the Gazette, appoint a Returning Officer for each electoral district who shall take steps to inform voters as early as possible of the particular polling stations at which they are required to vote and also that the circumstances should be such as to guarantee orderly voting without confusion.

The VLS will, among others, be used as a first step for identification of voters on Polling Day. It will be used at four rounds of elections during the General Elections (2016) namely; at the Presidential/Parliamentary, District Chairpersons’, Sub-county Chairpersons’ and Municipal Division Chairpersons’ and Councillors elections.

WHO WILL BE ISSUED A VOTER LOCATION SLIP (VLS)?

A person whose particulars appear on the Polling Day register will be issued a VLS.

NB:   The voters’ register is the primary document for the purpose of polling. A voter whose name is on the register but is unable to produce a VLS on Polling Day will be allowed to vote.

NB:   Issuance of the VLS shall not be carried out within 24 hours to the Polling Day.

N.B      No person shall be allowed to collect or receive a VLS on behalf of another voter.

THE ROLES OF THE SUPERVISORS

The Returning Officer/District Registrar and the Sub-County Supervisor shall supervise the issuance of the VLSs in the entire district and in the Sub-county respectively.

THE ROLES OF POLITICAL PARTY OR CANDIDATES’ AGENTS AND ACCREDITED

ACTS AND OFFENSES COMMITTED DURING THE ISSUANCE OF THE VLSS

Guidelines for National Issuance of VLS.pdf

"To organise and conduct regular free and fair elections and referenda professionally, impartially, and efficiently"

“To promote participatory democracy and good governance for the country’s prosperity.”